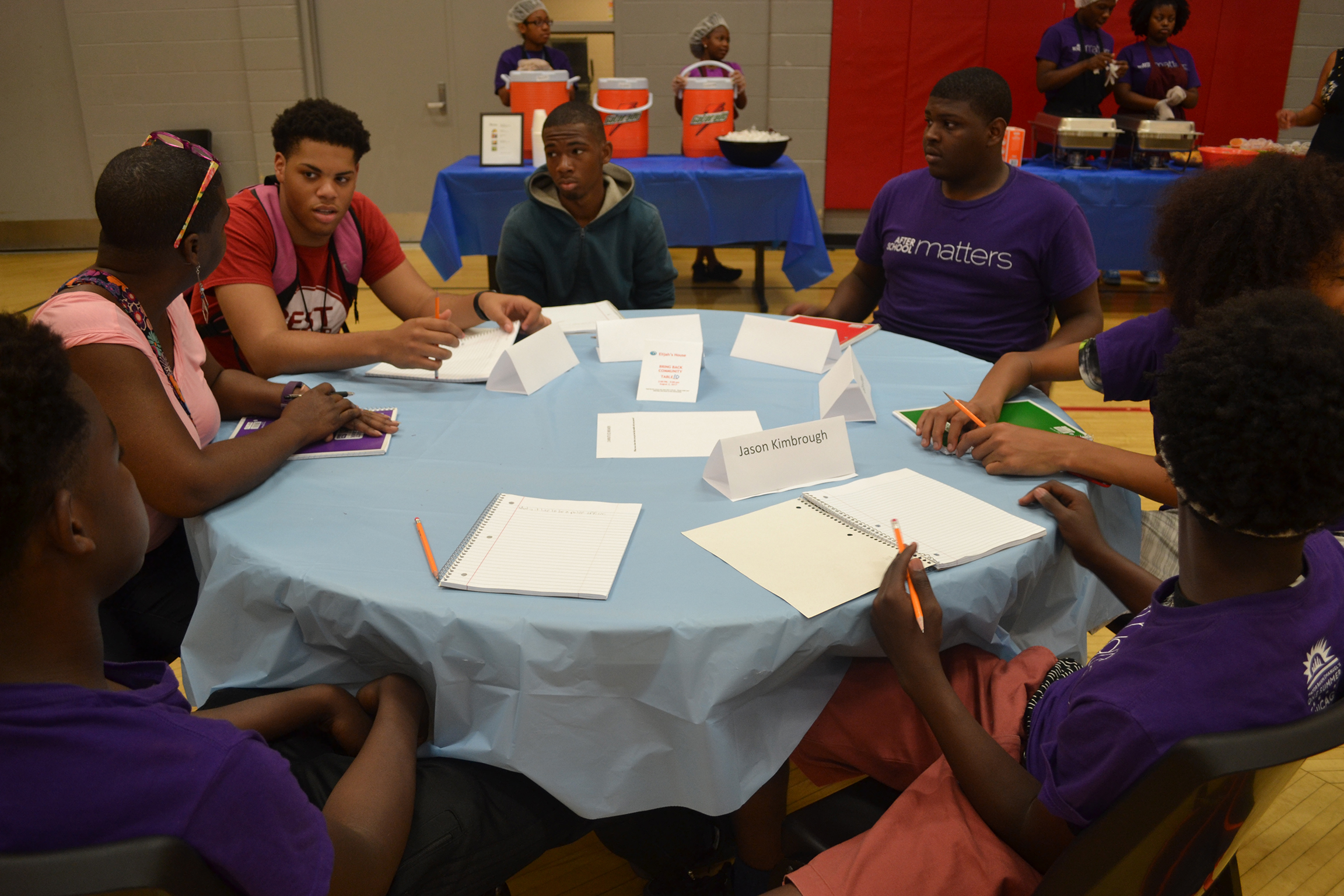 Elijah’s House kicked-off their anti-violence activities in August with an event to mend the walls of communication between Chicago’s youth and the Chicago Police Department. Venita Williams, Executive Director and planner of this event, said the idea was born from conversations staff members often had with teens about their daily concerns. They found that many teens had questions about the state of their communities and wanted to know the roles these officers played:

“…it was something that youth were always asking about… ‘why did this happen,’ ‘why am I perceived a certain way,’ ‘why are there drugs in my school,’ or ‘why am I targeted when I dress a certain way?”

The idea to host a round table conversation where Chicago police officers and young people from the community could sit down and discuss the issues face to face was born from these questions.

Elijah’s House staff understood that youth involvement in the process would be essential to achieving a successful event and their desired outcomes. With this in mind, they identified several avenues for young people to influence the event profoundly. First, students from the culinary program were recruited to cater the event. They spoke with their peers and planned a menu that both the police officers and the students would enjoy. Next, students from the journalism and broadcasting program conducted field research on youth violence, focusing their efforts in Humboldt Park. They wrote short articles on their findings and published them in Urban Teen Magazine which is produced by Elijah’s House. Their findings led to several follow up questions that later became core questions in the round table conversation.

On the day of the Round Table, students stood outside peeking through the crack between the closed doors. Once open, they rushed through to the registration tables, where they found personal name tags and their seating arrangements. As students grabbed food and took their seats, officers from the 11th and 15th districts arrived dressed in plain clothes and began mingling with the teens. Each table was composed of 8 to 9 youth and one officer; there was no facilitator or another adult present. The youth had full control over the dialogue and eagerly dove into their questions.

As staff walked the room, there was a sense of calm as the intimacy and openness of the conversation allowed for an amplified safe space for honesty and the ability to converse with ease. Venita Williams, Executive Director of Elijah’s House,  observed, “…you have these kids perceiving authority one way, but then they’re reconnecting in a different way.” Williams says even the shyest kids had something to say. As the event went on, the topics of their conversation broadened to include favorite school subjects and auto parts, as the youth and officers began getting to know one another on a more human level.

The feedback on the Round Table was unanimous amongst students and officers; both identified that there is a need for these conversations to continue. The goal of this event was to improve the interactions between officers and teens. However, Elijah’s House recognizes that this is only the beginning. To truly make an impact, conversations such as this must continue, as it is important these relationships are maintained. For Williams these connections can and will truly make the difference:

“…If I say hi to you every day, you begin to know me. And I begin to build that familiarity; then I do begin to feel safe within my community. I do know that if something happens, I have a direct link to an individual who can make an impact, who can help me turn a situation around.”

Elijah’s House hopes that similar Round Tables will spring up in other communities to further the conversation and engagement amongst the youth and the Chicago Police Department. For more information on their event, including a video check out the Elijah’s House website in the coming weeks at https://www.elijahshousenfp.org/.